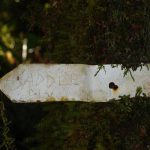 Permolat is the brand name for strips of aluminium that was used for Venetian blinds and making trellises, it was used by the New Zealand Forest Service, (the fore runner of the Department of Conservation), to mark back country tracks. It was cut into strips of 50 to 150 mm long and nailed to trees. Most permolat is white but in the early days the NZFS bought rolls of red permolat. Most permolat used today to indicate permolat maintained tracks is obtained by cutting up Venetian blinds. 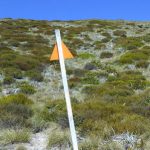 Is the Back Country path you are travelling on a track or a route. A Track is generally well defined, quite often benched with culverts and drains and bridged and sometimes has board walks. It is for the person who has little to moderate experience in the bush. A Route is often undefined and in stretches is non-existent except for markers from time to time, it is usually rough and very steep with few or no bridges and often just follows a river or stream bed or follows poles along the tops. It is for very experienced and expert trampers only. 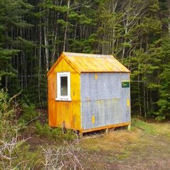 The difference between a hut and a bivvy has a rather large grey area where it could be either one but generally a hut has 4 to 40 bunks with facilities and amenities but a bivvy on the other hand is generally very small, has 1 to 3 bunks and is often so small that standing in the bivvy is a problem.

This term generally refers to remote areas of the Mountains, rivers and coast lines of New Zealand that take a day or three to get to.

this happens when there is no track or route and the bush and scrub is very thick and hard to push through, you bash your way through.

Generally, refers to travel in a river or stream bed where you find yourself hopping from boulder to boulder.

Thin plastic tape usually of iridescent colours for the mostly temporary marking of tracks and routes through the bush and scrub. 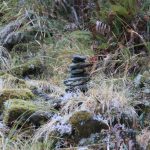 A small and sometimes large pile of rocks to mark a track or route, piled high enough to be obviously man made. Usually marking the beginning of a track or the entrance and exit from a river bed. On the tops where there is just rock and shingle the full track is marked by cairns.

This is the area of the high mountains or alpine zone that is above any tree or scrub growing area. It is mostly tussock grassland and above that bare rock and shingle.

This is the line across a mountain side above which no trees grow. Above this is the scrub zone and then the tops. There is a definite line where the trees stop.

Every hut should have a hut book, record your stay in this and enjoy reading about other people who have used this hut too.