At present Permolat Southland has 6 tracks to maintain, you can find them on the track list page on this web site.

First decide which track you would like to take on and let Permolat Southland know, organize a party of about 4-6 people and look for a fine weather window of 3-4 days, organize some gear and go and do it.

Track cutting and marking should be done as follows: 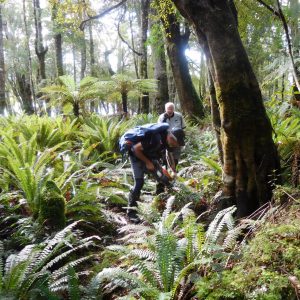 With marking, Permolat Southland will organize orange triangles and nails. When out on the track make sure when you are standing next to an orange marker you can see the next marker in both directions, if not put an extra one in. Use two nails and hammer them in only about 25 mm, then pull the orange triangle out to the end of the nail. (This allows for tree growth). Also check that scrub and overhanging branches do not obscure the next marker.

Where there is black sooty fungus on the trees it will get on the orange triangles and needs to be cleaned off with a scratchie pad. Any markers that the tree has grown right out to the end of the nails need to be replaced as soon they be pushed off the nails by the tree growth. (keep the tag but re-nail it). Do not nail markers onto dead trees as they rot and fall down.

With cutting, clear all vegetation at least one meter either side of the center of the track and two meters high. Hand tools will mostly be used, curved pruning saws and branch loppers, with a bow saw for the bigger stuff. (Chain saws should not be used unless the operator has a DoC ticket). However, a scrub bar and hedge trimmer are OK. Where a wind fall is encountered and the trunks are too big for hand saws then re-cut the track round the wind fall, marking the new section clearly.

Crown Fern is fast growing and gets a new set of fronds every year so the best remedy for them close to the track is to cut them off well below the growing tip, they will not grow back and the track will remain clear for longer.

Generally, tracks will need a trim up or re-cut every three years, let Permolat Southland know if you can’t do the next cut and we will find someone else amongst our volunteers.

Take plenty of before and after pictures and write up a report when you have finished and send it to Permolat Southland who will pass it on to others.