Several years ago, Alastair and Stanley recut the Strutt Bluff Track. However, since then it has become overgrown and more difficult to negotiate. Also, when Gavin and Stanley came down from Harpers Flat in January, after traversing Watkins Dome and Mt Napoleon, we had a lot of difficulties getting past an eroding cliff about a kilometre NE of Strutt where the river has cut in. The plan was to recut the old track and survey, cut, and disk a new one around the eroding cliff over the top of the bluff.

With a favourable weather forecast, our team of 6 rendezvoused with Jeff Rawles on the afternoon of the 6th September at the gravel car park about a km in from the road on the 4WD track to Strutt. Jeff took us into the old cullers hut about 1.5 km from Strutt.

Over the next 2 days, we recut the Strutt Bluff track and established a new one about a kilometre northeast, where the river has cut into the bank leaving a high eroded cliff face, necessitating a swim in normal to high flow. The new starts just before the eroded cliff and climbs up to a terrace about 50 metres above the river. It follows an old deer trail through an open forest. At the further end, it continues away from the river as there is an overhanging cliff. This loses height and does a dog-leg back to the flat on the other side of the cliff. The new track is about a kilometre long, well disked, and easy to find. There are large orange triangles at both ends.

We also walked up to Harpers Flat noticing a lot of blackberry. We climbed up Harpers Bluff finding it in excellent condition and removed a few fallen branches. I enclose a map of the route, a gpx file, and photos.

Strutt Bluff track is now open but it is very steep and exposed and great care is needed on it. It is only really suitable for experienced trampers as the potential for an accident is high for tourists. In terms of that, I’d recommend that access to Strutt be left at 4WD access.

Birdlife is good. We heard lots of morepork at night and during the day heard and saw Kereru, Tuis, bellbirds, fantails, and parakeets.

On 9th, Jeff, Tom, and his co-worker drove us back out which was a great help.

Our thanks to Stanley, Alastair, David, Sally, Gavin, and Annabel for your volunteering. Also, a big thanks to Westland DOC – Jeff, Tom, and his co-worker for taking us in and out to our basecamp.

Our team would be keen to come over to Westland next year for another similar project as it offers a respite and change of scenery from our Fiordland projects. 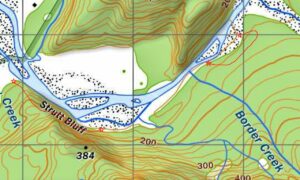 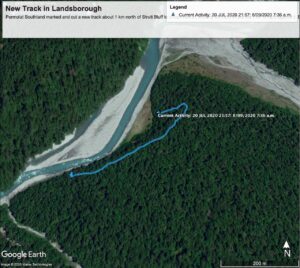 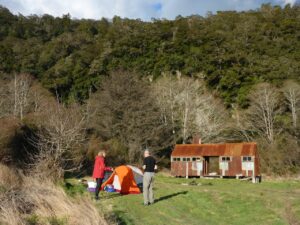 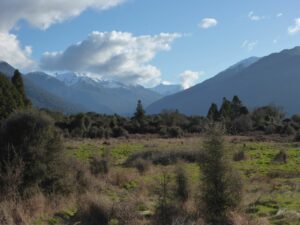 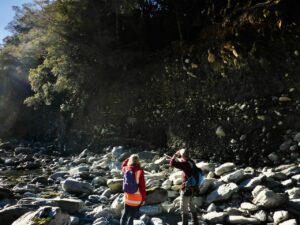 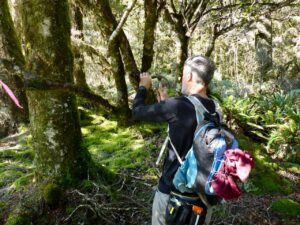 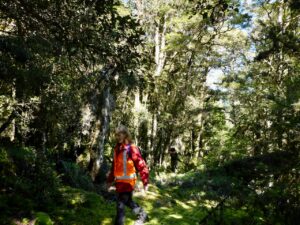 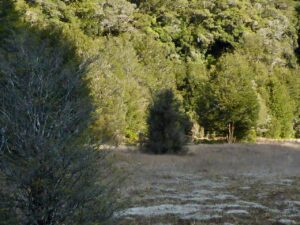 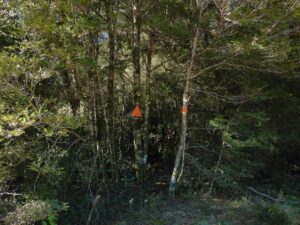 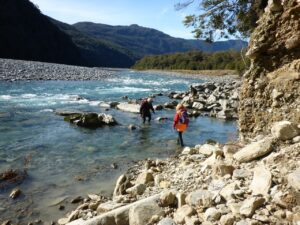 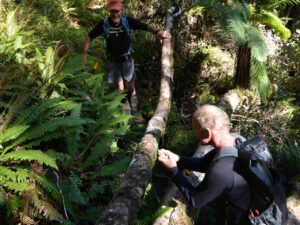 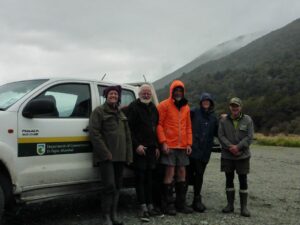